Indian army young officer Major Anuj Sood sacrificed his life in the Handwara operation on 02 May 2020. Major Anuj Sood led the operation along with his CO Col Ashutosh Sharma and bravely fought the terrorists to save the civilians trapped inside a house. Highly reliable official sources told that after an initial fierce firefight, there was a lull following which five security men—a Colonel namely Ashutosh Sharma, a Major namely Anuj Sood and two soldiers of 21 Rashtriya Rifles besides a Sub Inspector namely Mohammad Sagier Qazi of J-K Police’s Special Operation Group —moved close to a cowshed near the house where the terrorists had taken refuge after escaping from nearby Rajwara forests on Friday afternoon. However, there was a standoff between them and terrorists amid inclement weather. The five army men lost contact with colleagues on ‘tour of duty’. All the civilians were saved and terrorists were killed. India lost 5 brave soldiers in this operation.

All brave men sacrificed their lives while saving local civilians who were trapped inside a house in Handwara. Major Anuj Sood was a brave young officer who followed his commander until his last breath and led from the front. Here are some inspiring facts about Major Anju Sood that will motivate generations to come. 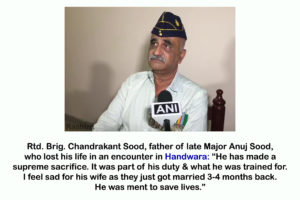 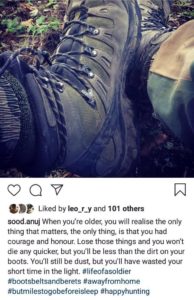